Bexley Women’s Club is about both service and friendship. We participate in community events through the year and hold regular club gatherings to bring members together. We offer many opportunities to connect, have fun, and make new friends.

Support for women & their families has always been a priority for Bexley Women’s Club. We work with partners like the YMCA Family Shelter, Bexley’s own Developmental Assets Resource Network (DARN), & Operation Buckeye to fulfill our social service mission.

Please consider making a gift to sustain the activities of the Bexley Women’s Club into the future. Donate now, or contact bexleywomen@gmail.com for more information about how to make a gift. 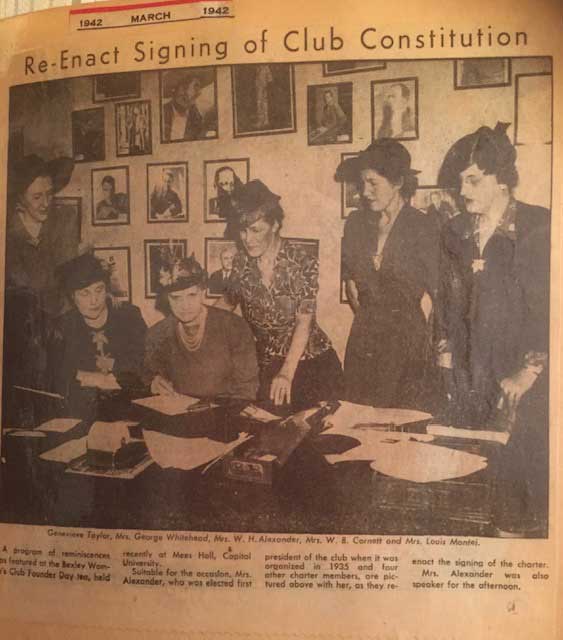 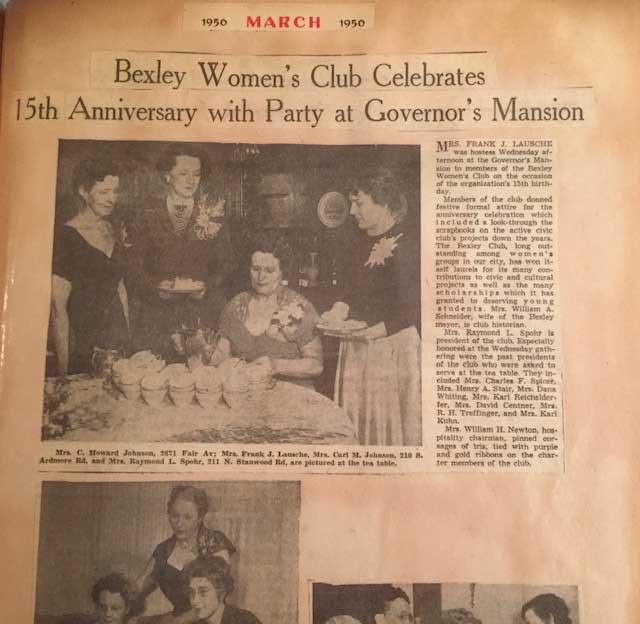 Investing In The Future

A commitment to education has been a priority of Bexley Woman’s Club from its beginning.  The club was formed in March 1935 with a meeting in the music room at Bexley High School.  In April, the first president & other officers were selected.  By the first of June of that year, there were 125 members whose dues of $0.50 per year had been paid.  Two years later, 1937, the Scholarship Fund was established.  From that point on, scholarships have been given.  In the beginning two scholarships (loans) were awarded: one to an O.S.U. student & the other to a student at Capital University. The O.S.U. award went to a student in the College of Nursing.  These beginning loans were for $50.00.  From 1937 until the present (includes scholarships given in June 2006, approximately 700 scholarships have been presented to students totaling nearly $325,000.

In the early years, women were the sole scholarship (loan) recipients, with Luther Long, a senior at Capital University, being the first male to receive a scholarship (1940).  By the 1960s, seniors at Bexley High School regularly received scholarships. Presently (at time originally written -2006), students at any college or university and seniors at Bexley High, CSG and St. Charles may apply. Each year theClub’s Scholarship Dept. sends a notice to area college and university financial aid offices letting them know of the application availability and deadline for applying. This same procedure is followed through the guidance offices at the high schools.

In the late 1930s through the 1940s, children from the South Side Settlement House were provided scholarship money in order to attend the South Side Y Camp during the summer. (Providing some funds to the settlement house / children continued well beyond the 1940s.)

The Club, through profits realized from the sale of the coverlet, donated $1000 to the renovation of the Bexley High School auditorium/seat purchase.  The coverlet designed in 1999 by club member Edie Mae Herrel depicts various Bexley buildings and landmarks.  (As stated in previous material sent, profits from the coverlet sales went to a variety of Community/Social Service projects.)

The Club also provides for a student to attend the summer OWL program at Ohio Wesleyan University.  The OWL program is for accelerated middle school students. The money is sent to this program to be used for a student who otherwise would not have the funds to attend.

Bexley Woman’s Club has a strong history and continued commitment to education.

Providing For The Present

The club also has a strong commitment to their community. Through the 70+ years of its existence, this involvement has mirrored the social and economic times of society in general. In the early years of the club, the members provided not only monetary gifts but also personal involvement to the Florence Crittenton Services and the Columbus Tuberculosis Society & Hospital. During the war years of the 1940s, the members were involved in American Field Services providing items to servicemen. An ongoing project, started in the very beginning of the club, is to give food baskets to churches and/or food pantries during the holiday season. Some of the other organizations the club has helped are: United Appeal, American Red Cross, American Cancer Society, the Columbus art gallery, Ronald McDonald House, Choices (an organization that provides help to battered women and children), Special Wish Foundation, a book program benefitting Columbus Public Schools, and school supplies to Broadleigh Elementary. This is by no means a complete listing of the Club’s Community work – just a sampling.

The Club voted to give $1000 towards the new shelter house at Jeffrey Mansion, $400 for the purchase of an outdoor bench, which was placed in the gazebo at Jeffrey Park and $500 towards the Tot Lot at Jeffrey. We gave $500 toward the OH historical marker that stands near the Bexley Library parking lot. This was a bicentennial project the club did in conjunction with the Bexley Historical Society. The marker depicts, on one side, the National Road (Rt.40 – Main St.) and on the other side, an interurban car (type of transportation).  Money was also given for the new flag pole at Drexel Circle.  These donations were made possible by profits from the sale of the coverlet.

BWC sponsors delegates to Buckeye Girls’ State. This is a time honored state wide program that affords young women the opportunity to live and work in a type of ‘government lab’ for a week. The past several years the students the Club sponsored spoke to our group at the Sept. fall meeting.

We donate to the Bexley 4th of July parade and also have representation in the event. In the past, we have been part of SummerFest, the Labor Day Block Party, the Jeffrey Mansion Garden Walk, and other community events..

As we strive to maintain the traditions set by our founders, we honor the past by keeping a strong commitment to education, to our greater community and to social needs.

The first Iris Lunchenon was held in 1935, the founding year. This luncheon is the ending and the beginning for each Club year.  Officers are installed and the past Club year’s achievements are announced along with the scholarship recipients. This luncheon is held in May.

The club’s general meetings have always been and are still a time to gather with friends and neighbors, enjoy great conversation and gain knowledge or be entertained by the scheduled program.

We feel the best way of ‘Honoring the Past’ and, in turn, honor all the members and their past accomplishments, is to look for ways to keep the Club viable and strong in the 21st Century, with continued support for education, community, social concerns, and building friendships.

We are an engaged women’s network actively participating in and supporting our community through scholastic and social services since 1935. Our activities are shared by members of all ages across Bexley.